To be successful with any aquatic environment supporting fish, retailers and hobbyists must know how to achieve and maintain a suitable aquatic environment. Fish that are pale in color and stressed are usually suffering from poor water quality. Symptoms of poor water quality are unacceptable pH, nitrite, nitrate, low dissolved oxygen levels, and fluctuating water temperatures.

Proper circulation and filtration have much to do with establishing consistently good water quality. Water quality parameters below acceptable levels will stress the fish in a pond or retail system, depleting dissolved oxygen levels and causing infection or even death. Applying a few simple modes of filtration, conducting periodical water tests and providing routine maintenance will ensure a successful, more profitable retail fish system. 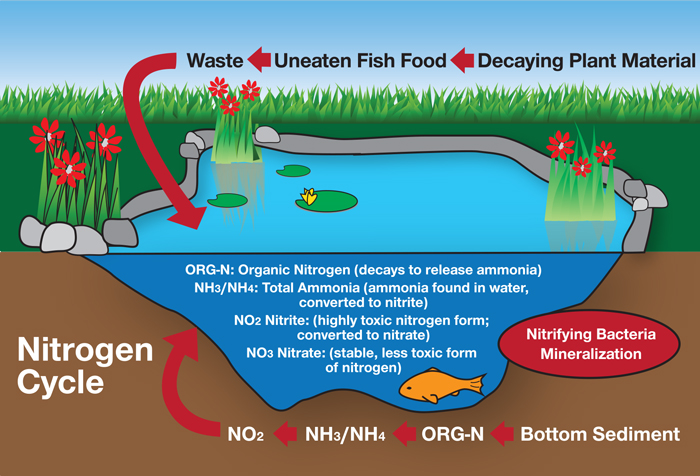 Air consists of 21% oxygen and approximately 75% nitrogen by volume. Oxygen dissolves poorly in water and can only exist there at a low concentration. Even so, dissolved oxygen is essential for the respiration of animals and bacteria in the aquatic environment. Ponds and aquatic systems containing free oxygen molecules are aerobic; those without are anaerobic. Anaerobic aquatic systems will not support higher life forms such as fish and bacteria. They are characterized by the presence of noxious chemicals such as hydrogen sulfide, which can cause odors. Anaerobic conditions are normally found in bottom sediment and dirty filters.

Fish are sensitive to the salt content of their waters. Each species has evolved from a system that maintains a constant salt ion balance in its bloodstream through movement of salts and water across the gill membranes. Fresh and saltwater species generally show poor tolerance to large changes in water salinity. Salts may be added to fish ponds at predetermined levels; doing so can fight off infection and parasites. 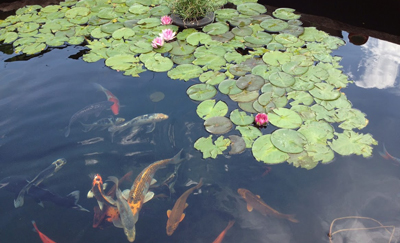 Nitrite is an intermediate product of the aerobic nitrification bacterial process. It is very toxic to fish because it oxidizes hemoglobin to methemoglobin in the blood (as carbon monoxide does with human hemoglobin), turning the blood and gills brown and hindering respiration.

Too much ammonia can cause serious problems in pond management. Fish suffering from ammonia toxicity typically stop eating and become lethargic. Several causes can increase total ammonia nitrogen levels in ponds. If the fish are overfed, uneaten food sinks to the bottom, decays and releases ammonia, increasing the load on the nitrifying bacteria in the pond and filter. Too many fish in the pond or system can mean that the wastes produced exceed the capacity of the nitrifying bacteria. The pond/retail system or filter may not be operating properly and may contain abnormal amounts of captured solids, depleting dissolved oxygen levels and overburdening nitrifying bacteria colonies.

Organic solid waste left in a pond or retail system will quickly decompose into harmful elements, lowering the water quality and stressing the fish. Decomposing waste consumes precious dissolved oxygen in the water. It's especially dangerous during the warm months, when water temperature within the pond or retail system may exceed 82°F. Rotting solid waste also increases the load on the biological (beneficial bacteria) filtering process, creating the potential for ammonia and nitrite fluctuations that are very stressful to fish. It is absolutely critical to routinely trap and remove solid waste (at least weekly).